Okay, I’m finally ready to give my review on Tales of Xillia, I beat the game in around 37 hours. I played as Milla Maxwell, one of the two protagonists […]

Okay, I’m finally ready to give my review on Tales of Xillia, I beat the game in around 37 hours. I played as Milla Maxwell, one of the two protagonists in the game, you can also choose to play as Jude Mathis, depending on whom you choose to play as, you will get a different point of view in the story told in the game.

The game takes place in the world of Rieze Maxia, which is a beautiful world, full of great looking locations. The game’s story revolves around the Lance of Kresnik, which is a powerful weapon, capable of destroying just about anything. During the game’s story, Milla and her friends will be trying to destroy the Lance of Kresnik, to prevent it from falling into the wrong hands. I won’t say much more about the games story since I don’t like giving too much away.

Throughout your journey in Rieze Maxia, you will come across tons of different variations of monsters to fight, to help you, you will have different party members that you take with you into battles, you can have up to four team members from your party in a fight, at the start of the game you will start out with only Jude and Milla, but as you progress further and further within the game, you will start getting new party members, each member has their own back stories, which is something I love about Tales of Xillia, I have played so many different games that don’t really give you much information on the people you meet within a game, but Tales of Xillia is different, you will learn so much about every character during your journey in the game. 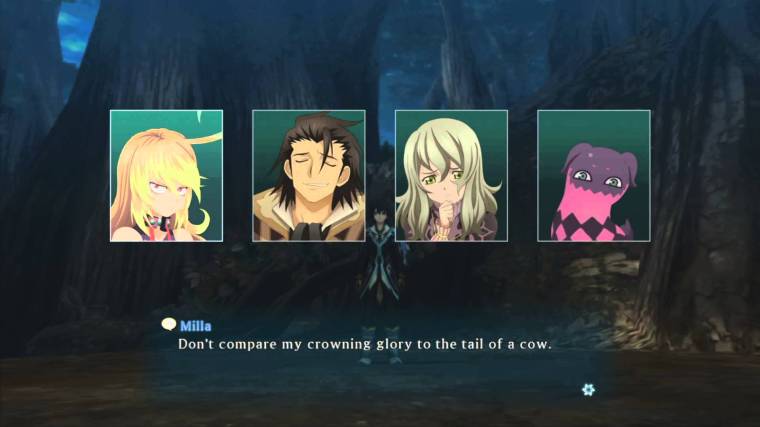 Another thing that helps you get to know each character in the game, is the skit system, during your journey within Rieze Maxia, you will encounter tons of different skits between the different characters in the game, these consist of talking character portraits, which are fully voice acted, skits have been in other Tales of games, but I felt like Tales of Xillia did them the Best, almost all the skits made me laugh, and I found myself enjoying them a lot, I never once felt the need to skip them, but the option is there in case you just want to carry on with the game.

now lets jump into the combat of Tales of Xillia, I loved the combat in this game, oftentimes I found myself grinding for no reason at all, just so I could play a few more battles. The games combat all takes place in real-time, something that sets Tales of Xillia apart from other Tales games, is the ability to link up with different party members during combat. When you link yourself to one of your party members, you will gain different bonuses, for example, if you link with Jude, he will constantly heal you and revive you if you die, you get different perks by linking with everyone, if you like with Rowen, he will block the enemy from using Artes on you. I personally loved the linking system within the game, and it gives the combat system added depth. the game also gives you the ability to swap party members in and out from within a battle, this is useful because some party members are more effective against certain types of enemies, so I found myself using this a lot.

the game also offers tons of different equipment you can use, each character has their own weapons they use, you have the ability to upgrade each of their weapons, this game is a little different though, to unlock new and more powerful sets of weapons, you have to level up the individual shops, this can be done by donating different types of material, which can be found around the world of Rieze Maxia, you will earn material by defeating monsters, and by picking up loot you find while exploring, you then go to the shop that you want to upgrade, and donate the materials, after you donate a set amount of material, the shop will level up, upon leveling up, new items will become available for purchase, I really liked this feature in the game, its something that i don’t really see often in other games, but some people may be put off by it since some people just want to buy stronger items right away, anyway the weapon shop isn’t the only one that can be upgraded, you can also level up the item shop, armor shop and food shop, if you level up the food shop, you will gain access to new food items, each of which their own special ability, some may raise the EXP you earn during battle, by a set amount, others may increase your gald gain.

Tales of Xillia also has a ton of different locations that you can visit, and thankfully, the game has a fast travel option, so if you don’t like traveling through tons of different areas, just to reach your destination, you can make use of this feature, and I personally used it a lot, just to save time. The option isn’t available right away, but it doesn’t take very long to gain access to it, so don’t worry.

in closing, I just want to say that I absolutely loved every second I spent playing this game, its easily on my top five best RPGS I have ever played in my life, I just loved everything about it, the story, the characters and the combat, are all top-notch, and I honestly have nothing negative to say about the game, if I had to complain about one thing, it would be the frame rate, later on in the game, when you become high-level Everyone in your party will be casting tons of different Arte’s, and this will make the frame rate dip by a lot, I don’t know how low it actually gets, but it almost becomes unplayable, thankfully I didn’t see this happen that often within the game, and it was rather random at times, but overall, it had little to no impact on how much I enjoyed this game.

if you love RPGS and are looking for something new and fresh, or if you have always enjoyed the Tales of series, then I highly recommend you pick up Tales of Xillia, you will love it!