Idea Factory has just announced that  MegaTagmension Blanc +
Neptune VS Zombies will release in North America and Europe in the spring of 2016 on the PlayStation Vita and is fully compatible with the PlayStation TV!

MegaTagmension is the first multiplayer game in the Neptunia series so far, which is exciting! You can team up with up to 4 friends over PSN or you can go with 2 support characters which grants a stat boost to your character in battle.

You can team up with previous characters in the Neptunia series and also new characters which includes Tamsoft and UzumeTennouboshi, Plutia, Peashy, Dengekiko, and Famitsu. You also have the ability to customize the style of the character you play as to your liking with items like glasses, eye patches, and masks.

I personally can’t wait for this game to release! More Neptunia games is always a great thing. I’ll include a trailer for MegaTagmension down below along with a few screenshots. 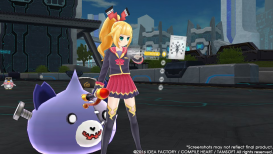