It’s time for another Yu-Gi-Oh! Review! As always thanks to Konami for providing me with Yugi’s Legendary Decks for review purposes. Let me start off by saying that I didn’t […]

It’s time for another Yu-Gi-Oh! Review! As always thanks to Konami for providing me with Yugi’s Legendary Decks for review purposes.

Let me start off by saying that I didn’t expect to receive Yugi’s Legendary Decks for review, so I was pleasantly surprised when it showed up in the mail thanks to Konami. Yugi’s Legendary Decks released back in November of 2015. The box set itself includes tons of iconic cards that were used in the first Yu-Gi-Oh Anime. Three individual Decks that were used by Yugi also known as the King of Games are included.

Fans of the original Anime will appreciate the three different Decks included in this set, the first Deck was used in the Duelist Kingdom Arc, the second Deck, which is my personal favorite was featured in the Battle City Arc and the final of the three decks was used against Atem. I’ve been a huge fan of Yu-Gi-Oh! For years now, I also loved the Anime when I was a kid, so I was excited when Yugi’s Legendary Decks was announced, it just contains so much value! I was amazed by the quality of the box that contains all three Decks, it feels sturdy and looks flat out gorgeous! Pictures simply don’t do it justice.

At first I was hesitant on whether or not I should remove the shrink-wrap from the box, mainly because this is meant as a Collector’s item, after thinking about it I finally removed the shrink-wrap and was greeted to all three decks, though the middle deck has a pack of cards which contains a few special additions for Yu-Gi-Oh! Collectors.

Let’s talk about the extra pack of cards included within Yugi’s Legendary Decks. The extra cards contained within the pack are as follows (Secret Rare) Electromagnetic Turtle, (Secret Rare) Dark Renewal, (Secret Rare) Black Illusion, (Ultra Rare) Glory of the King’s Hand, (Ultra Rare) Set Sail for The Kingdom, (Ultra Rare) Duelist Kingdom and to top off the amount of epic contained within Yugi’s Legendary Decks all three Egyptian God Cards are included! Though it’s worth mentioning that the versions of the God Cards included aren’t playable, they’re still great to have nonetheless. 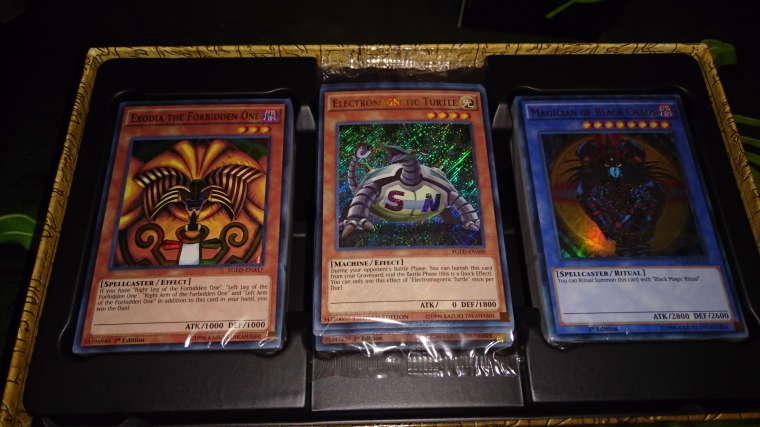 Each of the three Decks within Yugi’s Legendary Decks includes some great foil Cards! My two personal favorites are Dark Magician Girl and the brand new Arkana-style Dark Magician, which isn’t available in any other set, so the only way to obtain one to via Yugi’s Legendary Decks, the card looks awesome! You also get all five pieces of Exodia The Forbidden One! I honestly don’t think I’ve ever seen so much value packed into one box, this is without a doubt something that any Duelists should own.

Now how do these Decks perform against newer Decks? In my testing they performed decently, I did struggle against some of the newer Decks being used by Duelists, though it’s important to remember that these aren’t meant to be played at a competitive level unless you add a few cards to each deck to improve their overall performance, but I have to admit, it was both fun and nostalgic playing each Deck. I’ll include Deck profiles for each of the three Decks, these profiles should help improve the performance of each Deck by a large margin.

The main purpose of an Exodia Deck is to keep drawing and hope you get all 5 piece of Exodia, this will result in instant victory. There’s no real way to consistently draw every piece of Exodia, but this is the closet I could get.