Konami has announced a few Yu-Gi-Oh! Products which will be launching later this month, the first of which will be a new Booster Set! The Wing Raiders Booster set will be […]

Konami has announced a few Yu-Gi-Oh! Products which will be launching later this month, the first of which will be a new Booster Set! 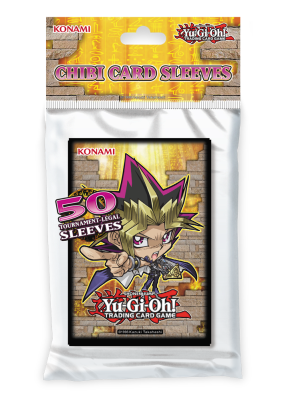 Next up we have the Yu-Gi-Oh! Chibi Card Sleeves. These Sleeves are great for duelists who want to protect their cards and keep them in mint condition. The Chibi card sleeves feature a glossy finish and they feel high quality, so they’re  definitely worth picking up if you enjoy chibi artwork. Additionally, you can also pick up a Yu-Gi-Oh! Duelist Kingdom Chibi Game Mat to go along with your Chibi card sleeves, and if you want a safe place to store your deck, you can also pick up the Chibi Card Case.

The Yu-Gi-Oh! TRADING CARD GAME is the #1 trading card game in the world with over 25 billion cards sold. It is a game of strategy, where players create individual Decks of cards collected from Structure Decks and Booster Packs. Two players engage in a Duel while using cards that represent powerful monsters, magical Spells and surprising Traps. Duelists with well-constructed Decks, dominating monsters, solid strategy and good fortune are the victors in the Yu-Gi-Oh! TCG. Konami Digital Entertainment, Inc. is the exclusive licensee and rights holder to the Yu-Gi-Oh! TCG in North America and Latin America.

KONAMI is a leading developer, publisher and manufacturer of electronic entertainment properties and traditional trading card games. KONAMI’s software titles include the popular franchises Metal Gear Solid, Silent Hill, DanceDanceRevolution and Castlevania, among other top sellers. KONAMI is also the manufacturer of the wildly popular Yu-Gi-Oh! TRADING CARD GAME, which has sold more than 25 billion cards worldwide. The latest information about KONAMI can be found on the Web at http://www.konami.com. KONAMI HOLDINGS CORPORATION is a publicly traded company based in Tokyo, Japan with subsidiaries, Konami Digital Entertainment Co., Ltd. in Tokyo, Japan, Konami Digital Entertainment, Inc. in the United States and Konami Digital Entertainment B.V. in Windsor, the United Kingdom. Details of the products published by KONAMI can be found at http://www.konami.com.